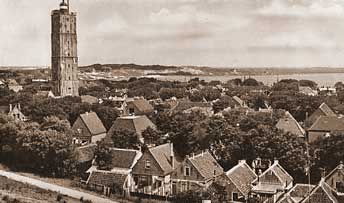 Although Terschelling was already known to the Romans as Wexalia, the oldest settlements date only from after 800 AD. Most of them were located on the ridges of Older Dunes, including Hee, Midsland, Landerum, Formerum, Lies and Hoorn. The sandy soils that were on a higher level than the settlement were used for agriculture, whereas the lower salt marshes, which were outside the arable ground, were used as communal pastureland. The channels between the sand barriers and the dunes have changed their position more than once by powerful storm surges, such as St. Hubertusvloed in 1287 and St. Elizabethsvloed in 1421. Settlements in the west that were located on a lower level consequently disappeared into the sea in the past centuries, like Wolmerum and Stortum. The villages of Stattum and Schittrum were abandoned, and now only the names of streets and farms recall what happened. However, the eastern side of the island grew larger and here the village of Oosterend was established. 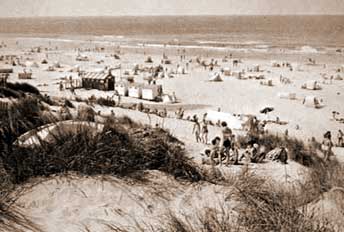 The importance of the Vlie as a strait to the North Sea increased as the ports at the Zuyder Zee grew. Therefore, Zuyder Zee town Kampen had a beacon built near a natural bay at the present village of West-Terschelling, around 1323. The beacon was later changed into a lighthouse, soon known as De Brandaris. Near it an anchorage place (roadstead) was built, which was useful for the fish supply for the Zuyder Zee staple markets (such as Harderwijk). Consequently, the village of West-Terschelling came into being on an embranchment of the Younger Dunes; it was the only village in the island that did not rely on agriculture. The village was controlled by the States General of Holland, because of the importance for the East India Company. The village of West also profited from the trade between Hanseatic towns in the Zuyder Zee and Germany and the Baltic Sea, and later also Scandinavia, England and Southern Europe. During the second war between Holland and Great Britain, West-Terschelling was almost entirely burnt to the ground by invading British soldiers; thus most of the buildings date back to the years after this event. The Dutch cities served as an architectural example when the village was rebuilt, and specific Frisian yellow bricks were used as building material. It was not until 1826 that a real port could be constructed and Terschelling then became the place of business for Loodswezen (‘pilotage’, 1835), Kustwacht (‘coast guard’), Vaarmarkeringsdienst, and shipping school Willem Barentsz. The pilotage system is now coordinated from lighthouse Brandaris. 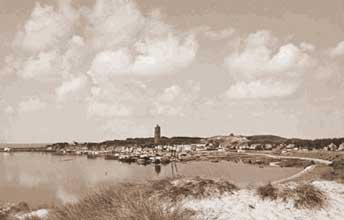 Terschelling extended from the dunes near West to Oosterend until 1850, surrounded by sandy islands on the eastern and western sides. The channel separating West from the sandy island of Noordsvaarder moved eastward, causing dune erosion and the formation of cliffs. This made the supply of sand at the ‘green beach’ increase and because of this, Noordsvaarder became connected to Terschelling in 1865. Some decades later, the same thing happened to the much larger sandy island Boschplaat in the east. The Dutch Department of Waterways and Public Works encouraged this development by connecting the various areas with shifting dikes. The Forestry Commission also attempted to decrease the sand drifts: pine forests were planted at West, Formerum, and Hoorn between 1910 and 1940, partly also for the production of wood. However, these pine trees do not grow in Holland by nature and the pine forests contribute largely to the dehydration of nearby dune valleys. 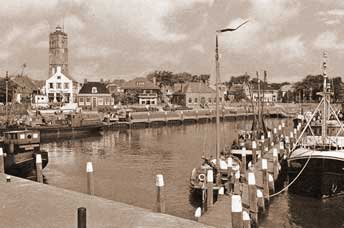 Just like the rest of the Dutch coast, Terschelling broke into the new market of tourism from 1960-1970 onwards. This brought relief to marginal farms: most of them now have a commercial function as well. In many places camping sites came into being that expanded several times. A more doubtful development in the landscape was the proliferation of chalets and appartment buildings near West aan Zee, Midsland aan Zee and Formerum aan Zee (since the thirties), and the change from camping sites to holiday parks. The expansion occurred especially at Oosterend, but the port of West also increased in size because of tourism. Nowadays, there are from east to west: the municipal harbour at Kom for the rescue team and the local salvage workers, the government harbour for the ferry, the fishing fleet of Terschelling, the Bruine Vloot (‘Brown Fleet’, charter sailing ships) and the more recent tourist harbour at Dellewalbaai.